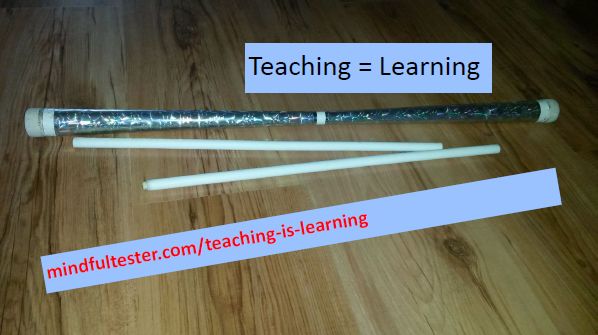 This week I sent 2 proposals for the Spring Event to TestNet, the Dutch Special Interest Group in Software Testing. One was for a presentation for 3 quarters of an hour, the other one for a workshop of 1 and a 1/2 hour. The process of writing proposals was time consuming and intense. My proposals will be rated and then ranked against the other proposals. Finally I will be notified, whether I have a speaker slot.

In 1992 I went to my first Dutch Juggling Convention. I was thrilled; I would be performing in the Public Show. It had taken me months to acquire the Blow Off Your Socks level of juggling. (I still dropped my juggling prop though.) The first part of the convention was a long warming up for my act.

On the first day I walked in the gym. I noticed a few people juggling, but a big white paper sheet drew my attention. It was a table. On one side time slots were mentioned, on the other workshop areas. 2 or 3 workshops had been filled in.  A marker was hanging on a string.

I am still amused, how simple it is to book a workshop for myself on a juggling convention. No rating, no ranking. Just write down my name, juggling prop, and level. Or one name and two nouns. (The only exception I experienced is an International Juggling Association convention, but that is another story.)

There are many possible reasons, why I signed up to give a workshop. I only wanted to share knowledge about juggling. My favourite juggling prop is the devilstick. Wouldn’t it be great, if there were more good jugglers with a devilstick? So this workshop was not planned. A coincidence to happen.

If there is a huge juggling convention which cannot be ignored by a mainstream juggler, then it is the European one. My first European Juggling Convention was in Leeds. This time I came fully prepared. I had rehearsed two workshops for devilsticking in English, which definitely differs from my native language Dutch. The schedule of each workshop I had written down and memorised. And the tricks and combinations were still evolving during my preparations. The most difficult part was to locate the workshop schedule. You still remember that big white thing on the wall attached to a marker. I had planned two workshops, but gave a total of 3 workshops. Good response can be a nudge in the right direction.

Looking back I notice exciting patterns:

The most important thing I learned was to observe the attendees. A struggle with the devilstick triggered the reaction: I had either been unclear or combined too many movements. So their struggle became my struggle. By dissecting my juggling tricks for my workshop pupils I learned more than I imagined. I determined the elementary movements to make more combinations.

Once a young woman was impressed by my flurry of movements of the devilstick. Then a man remarked dryly: “He is just combining a few little tricks.”

Let’s go back to testing. It is my way to earn my living after all. In one consultancy company I had to earn my place as a teacher or workshop leader. I spoke with several colleagues about test courses. Yes, they were looking for new teachers. My pitch was: “I have more than 15 year of experience with giving workshops in juggling.”

In the meantime I started to teach mind mapping to my colleagues. The whole process of dissection repeated for me: why do you add branches clockwise? What is a fast way to make a mind map? A lot of questions, which bothered the attendees. I learned to mind map according to the rules, but also using mind map programs working around their restrictions.
BTW I wrote this post using a mind map program while commuting. I moved and added branches to make this a compelling story. Hopefully.

My pitch became: “I have experience with teaching mind maps to colleagues in our company. These are my scores from their feedback.”

Once I had a funny insight to illustrate testing Virtual Reality with juggling. I had one brilliant test idea to start with. My colleagues were supportive and a Bit sceptic (with a capital B). To everyone’s surprise my proposal was accepted in 2008. The preparation gave me lots of energy and inspiration. What is a good test idea and why? Let me break it down for you and show it to you with Real Life juggling.

Then I noticed that there were more people willing to speak than available speaker slots in a test conference. As you might have guessed: I did not speak at many test conferences.

I started to miss the thoughts in my head breaking down my testing examples and improving them. So I began to experiment on my work, but that was not enough.

Why not start a blog and write about mind mapping, SFDIPOT, and 2 screens?  Wouldn’t it be great, if there are more good testers? So this blog post was not planned. A coincidence to happen.