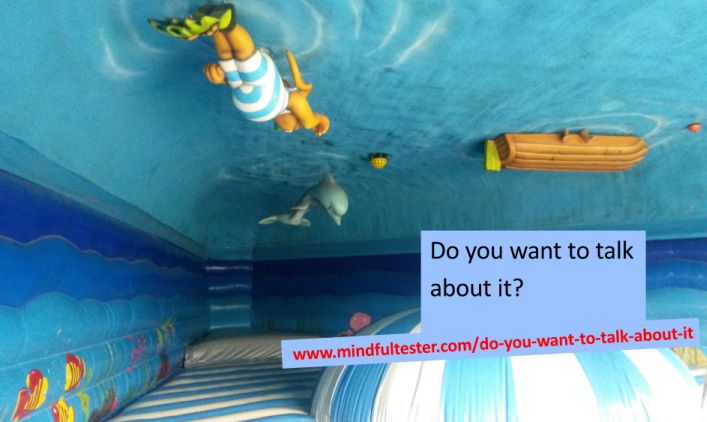 There are test conferences, which are always looking for new bright speakers. One way to find them is the Call For Proposals or CFP. In the past I had serious doubts, whether my proposal would be accepted. Today I pose my self two simple questions:

Sometimes I have to repeat these questions several times to pinpoint my subject.

A few years ago TestNet, The Dutch SIGIST (Special Interest Group in Software Testing), asked for subjects for their peer meetings. I suggested mind mapping. A few months later I noticed, that the subject was put on the calendar, so I volunteered to speak about it. The reply was, that TestNet needed proposals. I made two: one about the basics of mind mapping and another one about the use of mind mapping during testing. The latter was accepted.

A word of comfort for starters

I once read an article about the 100 Man Kumite. One man had to fight 100 man in an extreme short time. One Dutchman wrote, that he feared two types of fighters: the beginners and the experts. The beginners did unexpected things.

During one of her theater workshops Franki Anderson asked:
“Is every voice heard?”

Give me 5 minutes more

There might be a misconception, that an idea must be presented in 5 minutes. In the office 5 minutes of full attention of your manager, team lead or product owner can be a known restriction. You either learn or learned, how to squeeze your message or request to the bare minimum.

If I talk to my peer testers on a conference, I have enough room to sketch the situation. I have enough time to tell them about the problems I had to tackle. This can take about 20 minutes. Then I switch to the actions I took, taking 10 minutes. I end with 5 minutes looking at the results and lessons learned. In the Netherlands STAR is used: Situation Tasks Actions Results.

So, what would really trigger the organisers to accept your proposal and invite you as speaker to their test conferences? Exercises. Delegates or visitors of the conference go back home (to the office) with new ideas and real hands on experience. If you have any doubts about it, just look at TestLab. This popular activity is scheduled on different test conferences for years.

Let’s go back to my suggestion for mind mapping for the TestNet peer meeting. If I just talk about mind mapping, I can fill one hour. Participants get the idea, tell about it and forget it eventually. Exercises spice up the whole participant experience. I used to give 3 hour workshops about mind mapping for colleagues, who work in the IT. They made two mind maps during the workshop. The only thing I had to do, was to narrow the workshop down to testers. Instead of an one hour talk I now had an highly interactive workshop of 3 hours.

If you might have noticed: test conference organisers are looking for special sessions. I would suggest the following format for the workshop:

On my quest for knowledge I stumbled upon Peers with Beers on Friday October 24th 2014. Some participants are well known in the international testing community. For a ridiculous low price I could spend all office hours with them. I also joined the dinner, so I extended the time with another 5 hours.

During this peer meeting the participants were expected to present their ideas about testing in the future. The presentations were chosen based on the title. My presentation was not chosen. I realized, that I had a bad title. Too generic. Joris agreed with me:
“A good title is important.”

After each presentation the contents was discussed using K cards. I primarily observed the other peers: the way they discussed and the jokes they made. It was difficult for me to get in the right gear to exchange ideas. Huib remarked, that I was a bit silent.

During the dinner that evening the call for proposals of Let’s Test 2015 was discussed. Two days later was the deadline. Derk-Jan told a story about a rented car.  “We should make proposal for it.” We had a lot of fun about it. In the call for proposals there were no restrictions for the sessions. So this was totally acceptable. At the end of the evening Joep gave me a final advice:
“‘Do not forget the takeaways. ”

Weeks earlier I noticed on one of the pictures of Let’s Test 2014, that people were juggling with balls. I thought:
“I can teach them this easily”.
I gave many juggling workshops.

On the day of the deadline for Let’s Test 2015 I went to my PC and opened my mind map with the attached notes: What I learned from juggling as a tester?. I think, that creativity is necessary to become a good tester. As a juggler I have to amaze my public with my creativity. In my proposal I added a remark, that I would be able to extend the lecture with an one hour juggling workshop.

On November 6th I got the exhilarating news, that my proposal for a 2 hour workshop about juggling and testing was accepted. A total of seven proposals from Peers with Beers were accepted for Let’s Test 2015. So apparently, I was in good company.

[Updated:  Ard had a special Crime Investigation Game. This was held secret until the first day of the conference. So I increased the number of accepted proposals.]