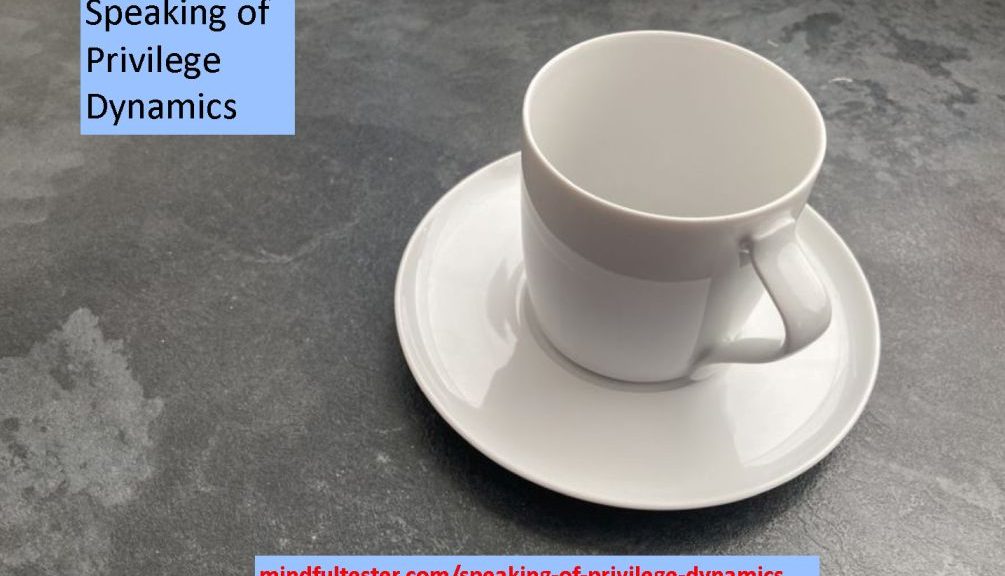 The story is that a good proposal for a talk and some preparation is a sure way to speak on a conference. There are other factors involved.

For this article I made up the term privilege dynamics. With privilege I am not writing about the honour to speak for a group of peers and their managers. It is about having enough resources to speak. According to me, dynamics is the way it forms the
world.

The first thing about privilege is asking for permission to go to the conference. My wife had mixed feeling about this. At the one hand she knows my love for speaking and at the other hand she wanted to know that I am in good hands.

The next in line for permission is my employer. My absence will lead to a drop in revenue. In some cases, I had to ask my customers to speak. This could have consequences for the results of the whole team.

There were employers who were really happy to send me as a speaker to a conference. In most cases they provide services and this benefits their companies. A lot of other companies are not eager to have a speaker at a conference. The benefits must be measurable in some way.

What is more appealing than to talk about than a real story? I can grab the attention of the public with a project or a sprint with some really insightful moments. There is a big chance that my employer or customer would not be pleased that some stories would be told afterwards.

For one talk I asked explicitly to use the graphs showing the results of a performance test. This added a lot of reality to my talk. For a workshop I created a website with an imaginary company based on real life experiences. This way no company or organisation was impacted by my stories.

Copyrights are a difficult thing to handle for a beginning speaker. When I was a consultant, the rights of almost all my talks went to my employer. This applies for a lot of things. I read a story about someone who used a private laptop to retain the rights of a book.

An argument would be that the employer pays me, so this might be a fair trade. I can speak at a conference and my company will own the results. The drawback for me is, that I cannot use these talks after switching employer. This happened once.

Then there are conferences which obtain the copyrights of the talks. Even if the conferences pay me very well, then I will no longer be able to use this talk for other conferences or occasions.

Another way to get permission is to ask for budget. Most of the time there is enough money to attend an international conference once in the three years. The costs of attending can be reduced by being a speaker. Things like a ticker for the whole conference, accommodation and travel might be covered. So, the costs can be reduced significantly.

There are several tech conferences to whom I sent my proposals for talks. I noticed that there were 2 categories. I would label the most conferences as mainstream. All subjects are welcome so long they support the general view. Things like old standards and proven practices are highly in demand, The only exceptions are talks about new trends by known consultancy firms.

A small group of conferences are exploring the space of different topics outside the comfort zone of the delegates. Somehow, they create a safe place to experience or share experiences about experiments and team culture.

My last workshop at a mainstream conference was about blogging. A few years later I gave a workshop about privacy laws and Exploratory Testing on a conference focused on new ways for testing.

Of course, not all talks are selected based on scores like content and speaker experience. Keynote speakers are chosen directly. This led to obvious choices on mainstream conferences. Men are chosen to talk about things like car racing and technology trends. Ladies are supposed to talk about subjects like research on human interaction.

There are still tech conferences with only male speakers. A certain gender can be huge advantage to get an invitation for a talk.

The usual argument of the conference is that the men are the best for certain topics. I was amused about a conference in Amsterdam with only female keynote speakers talking about testing. Several men protested. The female organiser just replied, that they were the best. Privilege can differ for each conference,

Minority speakers should be helped in any way. These people face all kinds of obstacles. Things like Code of Conduct can help a lot. Years ago, I wrote about a Balanced Conference Card.

Even then, a conference venue manager denied a service dog of a disabled speaker. It was like banning wheelchairs.

After a talk is accepted for a conference, then the most difficult phase starts. It is called preparation. And it is not all about the talk.  It is about spending time.

When I was a consultant and I had no projects for customers, then I could work on the talk during office hours.

The last years I made these choices based on permission to speak and copyrights. I had to reserve time for the conference. This was normally Paid Time Off or holidays. I was supposed to work during office hours. For a talk at a multi-day conference, I had to take a week off.  Also, my preparations were done in my free time.

Then there were conferences which did not cover the costs of travelling. When I was a consultant, then I would have no problems. My company would happily pay for the exposure.

For a talk as a free time speaker, I avoided most of the conferences which only offered me conference ticket. Then there were conferences with limits for the travel costs, which I could understand. No firm would like to pay for a first-class flight and taxis.

In one case I saved costs by taking the train instead of a plane. Once I read s story of speaker who got a ticket for a flight in the middle of the night. This was offered by the conference,

As a speaker I got the same benefits as attendees. All drinks, snacks, and meals are included. For a multi-day conference some extra things are needed like a bed and breakfast. Luckily, there are conferences which offer these things to speakers.  I got used to ask for stays and breakfast, if it was not offered right away.

Even when costs were covered by the conference, I had to collect bills. I could not let the conference pay for them at the moment of purchase. The biggest costs are for traveling. As a free time, speaker, I restricted my talks to Europe. Intercontinental flights tickets could be quite expensive.

In many cases I had to spend money from my saving accounts to be able to speak at a conference abroad. I had no business credit card like known consultants.

No companies were harmed, when I announced that I would speak at a conference. My employer and my customer were informed. I had had to ask permission in earlier stage of my talk preparation.

Some conferences encourage speakers to convince other people to come to the conferences. If I would refer people, then I could get a small reward. This could reduce the unfunded costs of travel, accommodation, and certain meals. However, in the Netherlands there are certain clauses in job contracts which forbid extra sources of income.

So, only speakers with a good job contract or an own company can benefit from this referral program.

After my appearance as a speaker in Sweden, my wife asked whether I had explored the surroundings. My answer was “No. I came for the conference.” And I wanted to meet people.

For sightseeing I had to leave the conference venue and go off site. I could have enjoyed the nature or some old buildings. My preference is to enjoy this before or after the conference. Then I would need permission for a longer stay.

In that case I need to ask my family for less family time and check my saving account for an extended stay. Even, if my company would sponsor my talk, then money is not available for a paid small holiday. I know at least one company which forbids to extend a stay even with personal budget.

Choosing my stays for the conference is not that simple. Some conferences offer only as many nights to stay as many days of the conference, Either I miss a part of the first day or a part of the last day. This part can be quite large, if I used public traffic or a car to go to an international conference, then my day of arrival or departure would cost me several hours,

Of course, my family had a big say about the date and time I had to be home again.

Being a speaker at some tech conferences is like being a consultant hoping to play even, If the costs would be compensated enough, then this would be great for me. At some conferences I gave free advice to the audience, who had paid the conference.

It was not done to send bills afterwards. This saved me the hassle of hourly rates or percentages of saved money on the short term. With fines over the million Euros for trespassing privacy laws I could make my workshop worthwhile.

In court, people with not enough money can use advocates for free, they are paid in other way. This is called pro deo. After such case advocates can pick more advantageous case.

A lot of conferences will say, that speaking is good for business. This might apply for consultants. When I only focused on the activities of my employer, there was the known problem of commercial activities. I could not monetise this knowledge.

After one conference, I could only small bits of free advice. This saved me a talk with a manager about job contracts.

TIL or This I Learned

In order to give a talk I had to make some sacrifices. Privilege made a lot of difference for me.