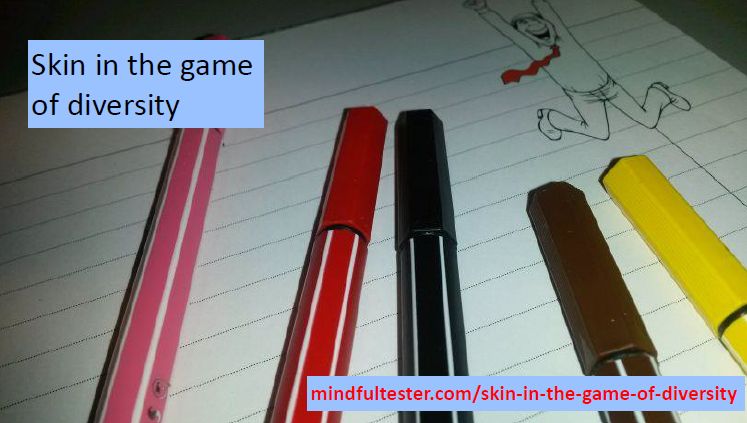 So I had my own piece of constructive feedback for tech conferences a few weeks ago.
Okay you may call it a rant. It was close.
Actually it was. For a good cause. Diversity.

As a blogger I could just lean back.
Now it was time for my action. Skin in the game.

There was one female co speaker. That makes two female co speakers.
Wait. Now let’s look at the incredible number of female keynote speakers of 0.
2 times 0 makes 0. If this would be quadrupled or octodupled, it would remain a disappointing 0.

In my experience there are more great female testers than 2 in the Netherlands. Let’s give them a place on stage. Main stage please. Thanks in advance.

In the past no correspondence was possible about the proposal selection process of this conference. Discussion takes time especially with Dutchmen. So a bit of transparency might help.

“You’ve got a question. What is your question?”
“I think that there are great stories of women out there. We don’t have the time to coach them.”
“Just go to techvoices.org”
[Update: TechVoices was formerly known as Speak Easy.]
“But this is a Dutch conference.”
“Indeed. But English is no problem for the attendees.”
“There are no Dutch coaches.”
“That also worries me a lot. A testing country without Dutch speaking coaches is strange.”

My first tweet to the conference was a wish for 2018: more female speakers than in 2017. No reaction at all. That was my target practicing. Next.

The next tweet was aimed to the chairman. I remembered two announcements of keynote speakers:

Ready, aim, tweet.
My friendly request to the chairman was to have a look at a list of female testers in case of keynotes.
The answer was considerate: some of the ladies had already spoken as keynote speakers, but he would try to get other ladies on stage.

My tweet had an unexpected side effect, which I had not anticipated. A case of collateral praise. One female speaker reacted with “cool and Very proud” to be on this list.

Target zero
A few weeks ago Rosie Sherry pointed to a whole discussion about #PayToSpeak. As a speaker it is the norm to pay your travelling and accommodation costs. Both Rosie and I don’t like this.

I reacted with a Balanced Conference Card.
Just answer enough questions with Yes and you have a balanced conference.

“Why was TestBash target 0?”
“It was not. TestBash is one of the conferences focused on balance.”
“Why did you call this paragraph ‘Target 0’?”
“It is an inside joke.
Programmers always count from 0.”

Anyways my blog post ended up in the newsletter of Ministry of Testing. Thanks.

A week ago there was another discussion about female speakers. I pointed to my blog post. Somehow I ended up as an ally.

Next tweet target was a huge European test conference.
You know: this size fits only one in Europe.
I actually was hesitant to send a tweet, but a disappointed tweet of a famous tester about another male lineup at a conf pushed me out of my comfort zone into my action zone.

Now comes the scary part.
The program chair had no Twitter account. A few years ago this was already mentionable according to his track chair. So I picked the conf itself.

I thought it was good to praise the conference organisers for actions taken for a diverse lineup this year. The aforementioned famous tester was also pleased with the steps taken in the past. So I retweeted her reaction with the request to keep up the good work.

The conf did. Gender bias was taken care of by making the proposals anonymous. Reads good to me.

By now you know the drill:

So if you want to have more diversity, you have my permission to use these actions.
Excuse me for scaring you.

Some tech confs have questions about diversity.  I respect their point of view. I heard really good stories about first time speakers supported by Speak easy
Oops let me add this to the list above.[v]

Conferences want praise from their attendees. So give New Voices a stage like Agile Testing Days. You know what: those first time speakers have a lot of keynote potential in themselves.

Bio 1: I am a white male speaker. My dad sent me to the best schools and universities, because he could afford it. I now work at a Fortune 500 company.

Bio 2: I am an African American woman. I grew up in the Bronx. We were really poor. The only times we saw a computer it was on the television.

One day I was invited by Per Scholas. They thought I was bright. I laughed. They suggested something with computers. Me and computers, I could not stop laughing for 1 minute.

Anyway I got some really good teachers. And I could touch a computer without some comment like:
“Hey, what you’re doing?”
It was not that difficult to pick up things. It was logical.

For me the time with Per Scholas was like a Christmas story. After school it would be back in the shop selling veggies. You know what. I got a good job offer. Ain’t that great?

“Wait you are writing everything down.”
“Sure.”
“But that is not a good bio.”
“I assure it adds so much flavour.”

Of course I am biased, if I see those bios.

Okay recruiters, don’t send me mails now.
I have a disappointing message for you. Both bios are fake.
Because this is a thought experience: you know like imaginary or hypothetical or dreamed up.

Now what is all that stuff about skin in the game?
Good question. Which needs a good answer.

If I get accepted by a tech conf and there is big unbalance, then I will bail out.
I won’t speak.
This talk will be dearly missed on my CV and my Conference Speaker Bingo Card,  but that is my skin in the game.