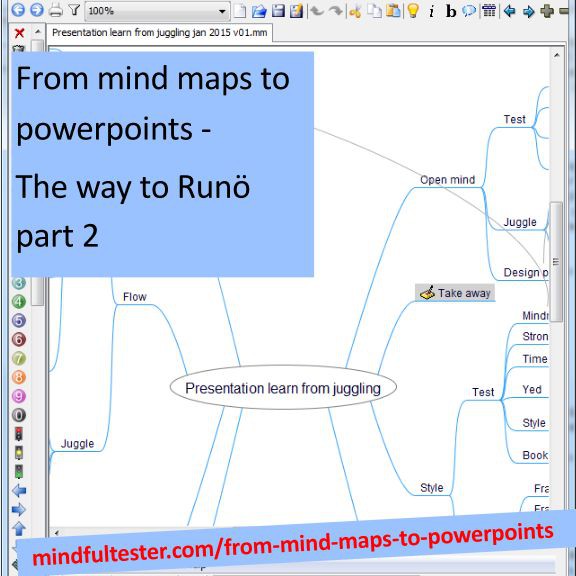 For a company training, which I followed, the trainer used a flip over, a whiteboard with markers, and a set of binders with hand outs. No PowerPoint, so no time was spent on editing and reediting the presentation. It looked lean to me.

Last November I was regularly looking in my mail box. There was a small chance, that I would be invited to speak at the Let’s Test conference 2015. But nevertheless it was worth the try. According to the tweets of the conference the speakers would be invited soon. And then …. I got the invitation. I did not shout as I had planned. But I was ecstatic.

After this surprising news I was busy notifying people. Then I realized, that my proposal was written from the jugglers’ point of view. The name of my 2 hour workshop is What I learned from juggling as a tester? So what’s in it for the testers, who would attend? That gave me a brief moment of panic. Luckily I had my mind map for the proposal. This became my starting point for my workshop.

The first mind map contained the five branches with takeaways:

In the takeaway mind map I made sub branches Juggle and Test under the 5 branches. Under these branches I brainstormed.

The second one was my outline mind map for the presentation. It described, when which takeaway would be presented .

One evening my wife asked me, whether I was preparing my workshop. I confirmed that. I mind mapped on my smartphone.

Looking to my outline mind map I split my presentation in episode mind maps. The first episode mind map I called first year. This was my abbreviation for the first year I was juggling. For each slide I created a branch. I added branches for the content of the slide, things I would tell and sometimes a title of the slide. This all lead to a Slides mind map, which contained the title and the text of all the slides in the right order.

Test Slide Story
In the movie industry first the scenario is written, then the story board. This board contains images of the movie, so all involved film crew members have a better idea, how the scenes will look. I used this idea to create my slide board, a serie of rough sketches of the slides. Every slide was created using the slide board, my pictures mind map, and my titles mind map.

I used a pen and lined paper for the first version. Then came the fun part: I used a coloured fine pointed marker to make changes. I noticed, that I still missed some titles and pictures. This process I repeated another time. Images were popping up in my head. So I had to take action to make pictures for the presentation.

One of the challenges I faced was to get nice pictures. For my presentation at TestNet Voorjaarsevenement 2014 I used my own pictures instead of stock photos. There were 2 pictures of some else I really loved to use. So I formally asked for permission and I got it in both cases.

From Mind Maps To PowerPoints

The making of the PowerPoint was uneventful: just copy and paste. Even after all the editing steps pieces were missing. I added mind maps like additions, research, and demo. On one point I did not like the order. So I made Order Mind Map, which I reedited several times. When I was happy with the order, I changed the slides in the Powerpoint.

A few weeks before Tasting Let’s Test Benelux I played with the idea: what would I do, if I got a request to speak? I focused on the big errors in my presentation.

A few days before Tasting Let’s Test I realised, that I had to make differences in the presentation. If the presentation would be the same like the one in the conference, then people might be disappointed. So I modified a few slides and also decided to change some juggling props. One slide had only title. It was good enough.

The day before Tasting Let’s Test I loaded the latest version of my presentation on my laptop. I had my MVP, Minimal Viable Presentation.