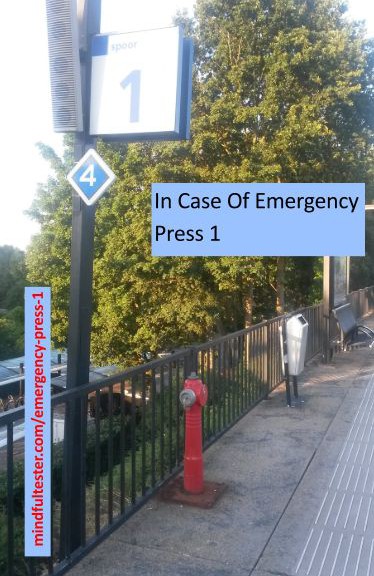 Speaker: Welcome to my writing “In Case Of Emergency Press 1”. My name is Han Toan Lim. I want to share some stories with you.

Facilitator: There is an opportunity to ask questions using K-cards. More information can be found here.

Speaker: In the weeks after the Dutch Juggling Convention in 1992 a new story circulated in the Dutch juggling community. During the Public Show some people had paid an undesirable visit to the camping site. There were no guards.
“Right after the convention I would be camping. The convention [in Delft] looked like a good rehearsal, then someone made some cuts in my tent.”, a juggler told me with a bit of disappointment.
Another juggler was really upset:
“They took my knife from my tent.”
Somehow this unwanted visit was not anticipated. Over the years the story was shared less and less, but it still stung me.

Now it is time for a flash forward. Several projects were weeks from the deployment. I had pressed for a meeting and finally my project manager had agreed. During the preparation of this meeting I had merged 3 Deployment Plans of the three systems on the same day. I had still doubts about the completeness of this resulting plan. All suppliers and other involved parties of the client were present. I was the chairman.

I began with stating the goal of the meeting: everyone should know, what and when they should do in order to deploy 3 systems on the same day. On the screen I showed a gantt chart made in a spreadsheet program. It was an updated version of the team lead of system administration. The time blocks for the deployments of each system was shown. Other time blocks were for preparation and wrap ups. Then it was time to go one level deeper. On the screen the latest version of the Deployment Plan was shown by me in a spreadsheet. The first activities took me some time to let the attendees make themselves familiar with the structure of the plan.

Facilitator: We’ve got a red card.
Attendee 95: What do you mean with “make themselves familiar” with the Deployment Plan?
Speaker: The Deployment Plan was a big table in a spreadsheet. So the size could distract the reader. So I first explained the heading from left to right. Then I went slowly through the first action. So the attendees could listen or read the information with enough time for reflection. Does this answer your question?
Attendee 95: Yes
Facilitator: I see no more red cards. So you can continue.

Speaker: The following pattern arised. I read the action aloud and made sure, that the person, who was assigned the task, fully understood the task. I questioned or let it questioned in different ways:

I preferred, that other participants voiced their thoughts. This was beneficial for the group interaction. It was not my one man show after all.

Let me focus on one particular action, restoring the backup. If the deployment would be stopped, then a rollback of the old systems had to take place. So a backup should be restored. But it takes a while to make a good one. To be more precisely one working day. So people had to be instructed, that the systems could only be used for retrieving information and not for storing new information. Some of these actions had not been planned in.

Because no abstract actions had to be discussed, it was relatively easy to describe the specific actions. If there was agreement about the action, then I immediately updated the deployment plan on the screen. If the description of the action was still ambiguous, then people had the opportunity to clarify it.

Then came the part of the failed deployment. Some attendees were reluctant to talk about it. There might be different reasons: the actual steps for a successful deployment were discussed in depth, so they probably would not be needed. Another guess of mine was, that after 2 hours of meeting people were tired.

Afterwards I got the compliment: “You did well.”

This writing I would like to end with a Lesson Used. So time for a flashback.

In 2002 I went to one of the organisers of the Dutch Juggling Convention in Amsterdam. He told me:
“I’ve got some flowers for you.”
Before I could digest the information, he continued with:
“Right after the Public Show we asked the volunteer coordinators on stage. We called Nienke [and gave her flowers].”
Then I said:
“The other volunteer coordinator is Han Toan Lim. He is not here. He’s watching the camping site.”
He waited a moment.
“They gave you the biggest round of applause.”
At that moment I was just relieved, that no bad things had taken place at the convention’s camping site.

I thank for your attention.

Facilitator: You can ask questions using this form. I have already 4 green cards.

[To be continued here.]