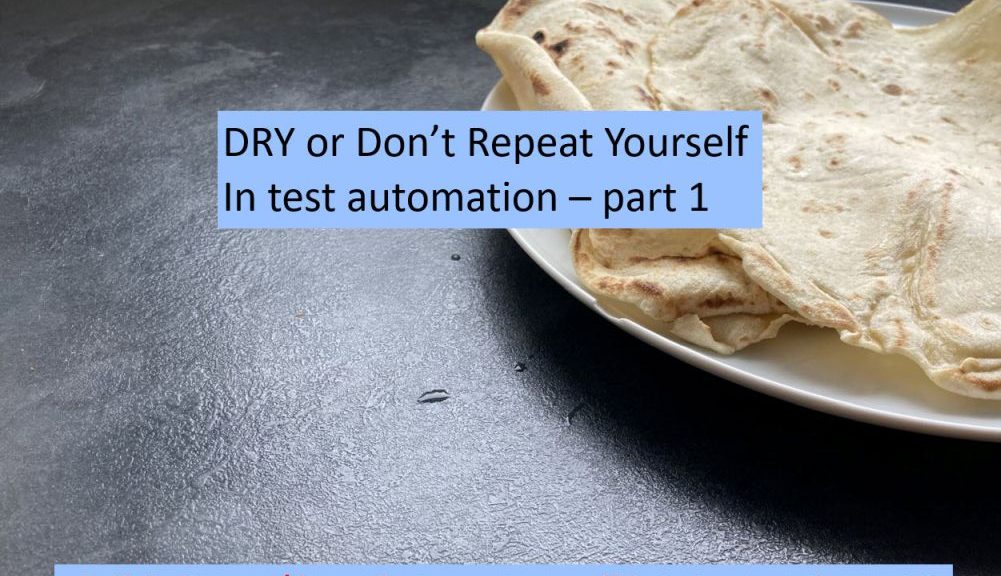 This month my wife thought that it would be a great idea to make wraps. She looked on the internet and found a good recipe.

The case of 3 recipes

Do you have a copy for me?

At that moment there are 3 recipes in use. There is no problem, because the wraps are still tasty.

Now imagine the following situation.
One evening I get a call from one of my kids.
“What is the bottle in the third row and second column?”
I open the drawer and pick the bottle.
“It is the sunflower oil.”
“Thanks, dad. Now I can continue with the wraps.”
“Wait, did I not use the right one?”
“Mom told my friend and she wrote down the change.”
“Then you already know, that mom adds an extra spoon of oil.”
“Wait. What did you say, dad?”

The more copies you make, the more things you have to watch. Especially, if things change. Now I could assign a task to myself to update all the 3 recipes all the time. That sounds to me as a part time job. I would rather spend that time on cooking.

In software development DRY or Don’t Repeat Yourself is used to avoid these kinds of mistakes. The more code I copy, the more I need to update in case of a change. This is part of my job. It would be great, if I could reduce these changes to a minimum.

In the following story the companies and products have been obfuscated.

After a few weeks of coding, I had test automation in place for the VIP Cinema App. In most scenarios the order page for the drink and snack was used.

In one test scenario I would order a drink and snack and go to the next page. Then I would go one page back and change my order. The desert scene in Monsters Unlimited is so good, that people get thirsty. I definitely needed 2 drinks.

A note for the screen reader users: parentheses, at symbol, dot, and double quote are used in the code. It is advised to change the interpunction and symbol level before reading the code.

Don’t Repeat Yourself or DRY in practice

Now I had several lines in my code to change the number of Colas on the drink and snack page. The first line of Java code looked like

The second line of Java code was:

This means: enter “1” in the Number of Colas in the text field on the Snack and Drink Page.

The third line of Java code was:

This means: enter “2” in the Number of Colas in the text field on the Snack and Drink Page.

For my code I used Java. This is an object-oriented programming language. The Number of Colas text field in the Snack and Drink Page is an object, which I used for test automation.

A test scenario would only contain the following code once:

The code to make this text field was written once instead of twice. I did not repeat myself. In this particular DRY or Don’t Repeat Yourself was not applicable.

Ready for the change

For me and other people 4958495 is not related to a Number of Colas text field. It makes the code hard to read.

I assumed, that the development environment had assigned a random number to each web element. Luckily it was a unique number, so my text automation code would work at that moment.

If a developer would change something in the Snack and Drink Page, then the random number or change might also change. this would result in broken test automation code. That is the bad part of my job.

The best way to identify the text field was to use id. id is short for identity. id is an attribute of the web element, which is used to identify it.

I talked to another tester, who agreed with me. The programmer should change the code for the text field. In turn I would have to change my test automation code:

If the name would change to some other random number, the id would be the same.

A cliffhanger at your request

The code with the name attribute looked good enough for me, but there was still too much repetition.