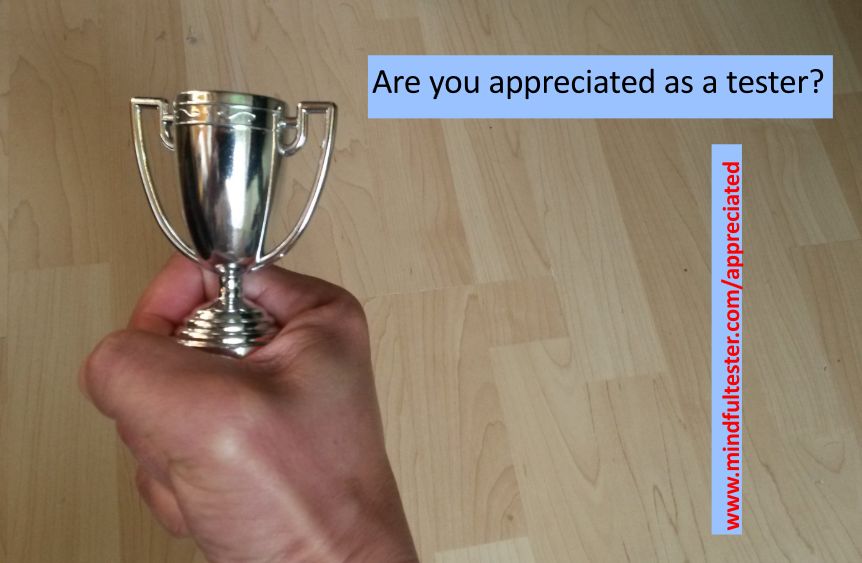 Some people might wonder at the size of the cup. My answer is, that I got it from a famous tester. Then the following list of action points is likely to be proposed:

At that  moment I would interrupt with:
“Time Out dude. You cannot buy appreciation; you have to earn it.”

The consultant with a strong HR background in IT looked at me.
“I see those small wheels spinning in your head. If you can read a design document, you can probably write one.”
“I already did.”, I admitted.
He continued: “Then you can describe the flow. If you can describe the flow, then you can program.”
He looked to me with the silent question:
“Why do you not move up the ladder?”

At that moment the time slowed down to a stop. Internally I sighed for 3 seconds. Then time accelerated to the normal speed. Reality snapped back and I was confused. Only a tenth of a second had passed in reality. I saw a man looking at me and waiting for an answer. Like a stubborn school boy I stated: “I just want to test.”

During the holiday my wife talked about the show for children: “The theme is job. So a member of the animation team asked the kids about the job of their father.” I heard, that one of my kids answered with “Not a real job.”. I groaned. Another one said: “Software tester.” My wife imitated the small, hesitant voice of animator: “A software tester?!”

Then she prepared me, that something worse would come. I steeled myself. The next kid said: “Police agent.” The voice of the animator became enthusiastic: “Police agent. Did you hear that: police agent. That is great!” My wife was not pleased. Neither was I.

On my last day in the office and my last workday I noticed, that one of the functional application  managers had not dropped by to say goodbye. So I went to his desk. The talk, that followed, was about gone times, the present time and  times to come.

During the talk we had walked to the door to the corridor. It was the door to a new future for me. It was time to say goodbye. While shaking hands the functional application manager extended his left arm and patted on my shoulder. He let his smile disappear and instead he pressed his lips together to suppress his sadness. “You fare well.”
At that very moment I really felt appreciated as a tester.